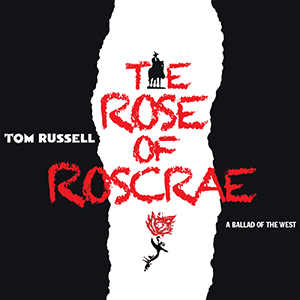 Out now and available from:
Propermusic | Amazon
iTunes

For over four decades and 28 album releases Tom Russell has continued to live up to his status as “one of the best singer-songwriters of our time” (Washington Post). His previous two studio releases, Blood and Candle Smoke (2009) and Mesabi (2011), are considered his strongest composed works yet and were, in part, recorded with the groundbreaking roots band Calexico. In the 1990s, Russell and Dave Alvin were hailed as the architects of what came to be known as “Americana” music after their Merle Haggard tribute, Tulare Dust, initiated the Americana charts in the U.S. and remained number one for a year. Russell’s previous release, Aztec Jazz (2013), moved Americana into a new realm and his acclaimed song catalog into uncharted territory.

Tom Russell’s songs have been recorded by Johnny Cash, Doug Sahm, Nanci Griffith, Lawrence Ferlinghetti, Dave Alvin, Joe Ely, and others. The Rose of Roscrae is his third in a series of acclaimed folk operas, follows The Man From God Knows Where (1999) and Hotwalker (2005). Russell has also composed movie scores, including songs for the Monte Hellman movie The Road To Nowhere. and published five books, most recently 120 Songs of Tom Russell. An accomplished fine artist, Russell’s paintings are featured in: Blue Horse/Red Desert: The Art of Tom Russell.

Read the reviews and find out more about Tom’s latest album at www.roseofroscrae.com