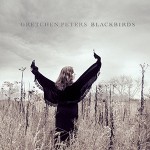 Gretchen Peters new album ‘Blackbirds’ is released today and has been receiving some great reviews in the press and online. You can read a selection of the best one’s below.

“Without doubt a brilliantly crafted record, hugely enjoyable” – Folk Radio
“It is a class act, and one that is excellent by her own high standards” – Spiral Earth
“Maybe Rosanne Cash and Lucinda Williams owned the generational airways in 2014 but Gretchen can be the anointed one in 2015” – Three Chords and The Truth
“a seemingly endless trickle of loveliness, a touch of true class” – Americana UK
“the first five-star album of the year” – Northern Sky
“This is a superb album and is highly recommended” (5 Stars) – Festivalphoto
“powerful, poignant and profoundly moving” – FolkWords