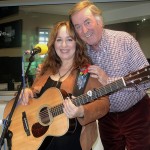 Gretchen Peters appeared on yesterdays BBC Radio 2 Weekend Wogan show to talk about her new album ‘Blackbirds’, upcoming tour and perform two songs ‘When All You Got Is A Hammer’ and ‘When You Are Old’. During the interview Gretchen talked about moving from New York to Nashville, her induction in to the Nashville Songwriters Hall of Fame, her upcoming tour and life on the road. You can listen to the show in full on the BBC iPlayer or click below to hear Gretchen’s interview and performance.

‘Blackbirds’ is available now from Propermusic.com, Amazon, iTunes and all good record stores.