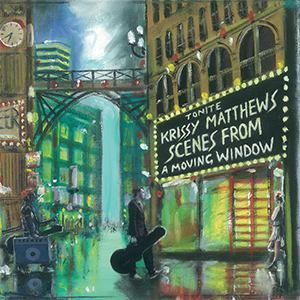 Guitarist, songwriter and vocalist Krissy Matthews’ new album sees this highly talented 22-year old join forces with the legendary Pete Brown, best known for co-writing many of Cream’s celebrated hits of the 1960’s with the late Jack Bruce, and for his work with such esteemed figures as Graham Bond, Peter Green and Jeff Beck.

“Scenes From A Moving Window”, out on March 2nd 2015 via Proper Records imprint Promise, is Krissy’s 5th album and includes a dozen songs, eleven of which written by the pair, with the Blind Willie McTell clasic “Searching The Desert For The Blues” also in the mix. The album was also produced by Pete Brown.

At the young age of 22, Krissy Matthews has already appeared at clubs and festivals all over the World. He recently performed at the famous Loreley Festival in Germany alongside Joe Satriani and Joe Bonamassa, to an incredible response. In the past 5 years, he has shared the stage with the likes of John Mayall, Clem Clempson, Chris Farlowe, Rick Vito and Jeff Healey, and played direct support for artists such as Robben Ford, Ten Years After, Joe Bonamassa, Gregg Allman, Beth Hart, Derek Trucks and TOTO.

Krissy will be touring throughout the whole of 2015.

“A stunning example of innovative blues. Great promise for the future.” – Jazzism
“Watch out Bonamassa, a successor is ready!” – Rootstime