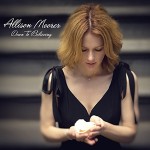 Moorer says about the new album “I didn’t even know it was going to be a record, I was just writing, which is what I do — can’t not — just writing songs as a staff writer for Warner/Chappell and making demos, as you do. Coming up with cool stuff here and there that I thought might be for me if and when I got the opportunity to make another record.

I started working with Kenny Greenberg again because, in the demo-making process, you have to get things done really quickly. Kenny is just the best guitar player that I know and he has this amazing way of making things sound famous really quickly. I was also excited about working with Kenny as a producer again because I felt we still had work to do together. Turns out he felt the same way, and we both feel very satisfied with this album, musically and emotionally.”

Down to Believing is Moorer’s ninth album since 1998’s Alabama Song (including the live Show), plus nominations for an Academy Award and a Grammy.

The album is available now
Buy, download or stream