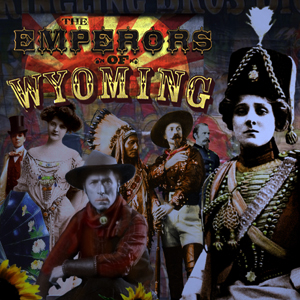 Watch the new video from The Emperors of Wyoming for ‘The Pinery Boy’ which is based on a 19th century Wisconsin River ballad. Phil Davis says of the song “it’s something of a folk classic and has been recorded by dozens of artists around the world through the years. Frank and I took some liberties in the transcription of the original lyrics and I also wrote some new ones at the end to give the story a spooky resolution. Since previous artists had done the song in more traditional ways, most often with acoustic instruments, we decided to give it a full out rock treatment with big electric guitars and a driving beat. To get to the Twin Cities from Madison you have to cross the Wisconsin River, and it’s a very beautiful but deceptively dangerous river with unpredictable undercurrents that every year takes away swimmers that underestimate it’s power. Now when I cross the river I look down and think of the Pinery Boy and his lover, never to be found, down there forever.”

The Emperors of Wyoming’s self titled album is available now from Propermusic.com, Amazon and iTunes.