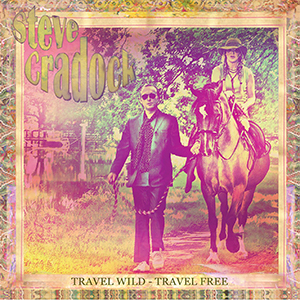 A founding member of the iconic Britpop band Ocean Colour Scene and guitarist for Paul Weller since 1992, the Solihull native has long been regarded as one of Britain’s most talented musicians and a part of the country’s musical heritage.

The affection and knowledge for his craft amassed over the years are truly tangible on the latest thoughtfully constructed 13-track album. Ever the savvy collaborator, Steve co-produced the album with his wife Sally Cradock, who also provides vocals, and enlisted the help of Squeeze’s Chris Difford to co-write the track “10,000 Times”.

The record radiates relevant retro as a 21st century ode to Sixties psychedelia. From the get go, dreamy opener “Any Way The Wind Blows” immerses us in an exploration of sounds in the best of British musical tradition. Steve’s skilled song writing and expert multi-instrumentalism are evident on tracks such as “Sheer Inertia” and “Travel Wild – Travel Free”. This record is a true labour of love from a man who clearly knows how to write and use catchy hooks, hip vibes and lush melodies.

Travel Wild – Travel Free proves once again Steve’s knack for creating music that feels at once familiar and innovative, music that both transcends and cements itself in our country’s cultural tome.