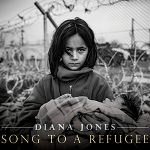 Diana Jones has shared the first new music from her upcoming album, Song To A Refugee, which is being released on September 25. The new double A-side digital single features the album track ‘Humble’ plus the previously unreleased non-album track ‘I Can’t Breathe’.

You can listen to both tracks below or find them now on Spotify, Amazon Music, Apple Music or you favourite digital music service.

Here’s what Diana had to say about the song ‘Humble’, “After surviving a gas leak in my apartment and being sick for a year, the song Humble came to me. I was deeply in touch with my own and our shared vulnerability, how we make our plans and life changes those plans, sometimes in an instant and yet we keep trying.”

Continuing with ‘I Can’t Breathe’, Diana says “On July 14, 2015 Esaw Garner, wife of Eric Garner spoke out about the settlement she was to receive for her husband’s murder at the hands of New York City Police. The song I Can’t Breathe came to me as eleven church bells rang for the eleven times Erica Garner repeated these words before he died. Five years later on May 25, 2020 George Floyd spoke the same words as he was being murdered by Minneapolis police officer Alex Kueg. I added the word “daughter” to the song for Breona Taylor, innocent and murdered by police in her own home March 13, 2020. It’s time for accountability and change for racist practices in the USA and around the world.”

Find out more about Song To A Refugee