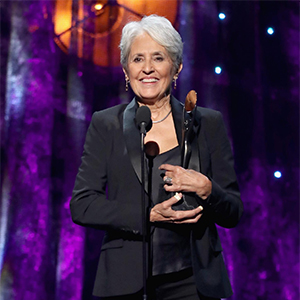 Congratulations to Joan Baez, who was inducted into the Rock and Roll Hall of Fame on Friday night at a ceremony held at Brooklyn’s Barclays Centre. The folk singer and activist was presented the honour by her friend and collaborator Jackson Browne.

Accepting the award, Baez made a passionate speech about social change, you can read an excerpt from the speech below and read it in full here.

“My voice is my greatest gift. I can speak freely about the uniqueness of it precisely because it is just that: a gift.

The second greatest gift was the desire to use it the way I have since I was 16 and became a student of and practitioner of nonviolence, both in my personal life and as a way of fighting for social change. What has given my life deep meaning, and unending pleasure, has been to use my voice in the battle against injustice. It has brought me in touch with my own purpose. It has also brought me in touch with people of every background. With open, generous, fun loving, hardworking people, here in this country and around the world. It has brought me in touch with the wealthy, the ones who are stuck in selfishness, and the ones who give generously of their time and resources to benefit the less fortunate, and light the way for others to do the same.”

Watch Baez talking to CBS news in America before she was inducted.

Baez’s latest release is The Complete Gold Castle Masters, a 3 disc collection featuring the albums Recently (1987), Diamonds and Rust in the Bullring (1988) and Speaking of Dreams (1989). The collection is available to buy, download or stream now.