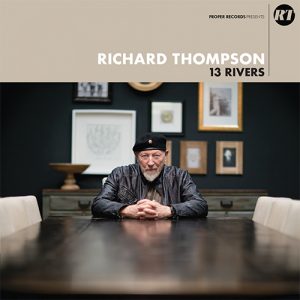 Find out about the newly announced 13 Rivers album, out 14 September 2018

Richard Thompson has announced plans to tour the UK this October (2017) with dates across the country at venues including Brighton Dome, G-Live in Guildford, the Millennium Centre in Cardiff, Edinburgh’s Usher Hall and many more. Ahead of these dates, Martin will play Gawsworth Hall in Cheshire on the 9th August and Fairport’s Cropredy Convention on the 11th and 12th August, you can find all of Thompson’s upcoming UK dates below.

Thompson will also release two new albums simultaneously on 11 August, Acoustic Classics Vol. 2 plus Acoustic Rarities, both on his own label Beeswing.

On the heels of the success of Acoustic Classics in 2014, Acoustic Classics Vol. 2 will feature acoustic renderings of classic songs from the Richard Thompson catalogue, some previously recorded by other singers, some previously available only in a band format. Acoustic Rarities is new recordings of some of the more obscure songs in the Thompson catalogue, some previously existing only as cover versions. Further details on the albums to follow soon. Special three-disc vinyl LP and double CD versions of both albums together will be released exclusively via Pledge Music.