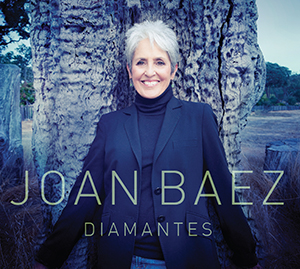 ‘Diamantes’ is the new album from Joan Baez, due for release on the 9th March, the album was originally created for a tour of South America in 2014 and is being made available on general release for the first time. It combines Spanish language songs culled from the 1988 recording, ‘Diamonds and Rust in the Bullring,’ with some concert favourites and two newly recorded Portuguese songs “O’Cangaceiro” and “Ate Amanha/Te Ador”.

Diamantes is being release to coincide with Baez’s upcoming European tour which begins in Italy on the 7th March.