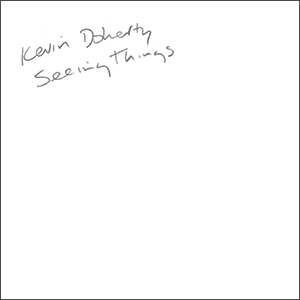 Donegal native and Dublin resident, Kevin Doherty has enjoyed a dual career over the last two decades – both as a solo artist and member of the folk supergroup, Four Men & A Dog. While his work with the latter has tended towards a more exuberant and eclectic blend of trad, folk and Americana, his own work is more typical singer-songwriter fare.

‘Seeing Things’ comprises ten new songs written by Kevin and arranged by Michael. The record deals with what we all have to deal with, namely ‘coming to terms’ with this world, the daily battle and the constant unfolding. Doherty moves beyond the temporal to a place that allows him a conversation with Jesus and a chat with John Henry, where he transforms himself into a bird in an act of defiance and where he observes Cleopatra’s arrival into the eternal city from a window in the Gresham hotel. The album owes a debt to Seamus Heaney and for much more than just a title.

Lyrically and melodically he mines a similar seam to the likes of Leonard Cohen, Tom Waits, Randy Newman and Van Morrison, with no shortage of poetic soul-searching, introspection and a little social commentary.

“Doherty is off on another journey to the heart, with songs of seductive melancholy. Serious recognition is overdue.” – The Irish Times
“Superior Singer Songwriter releases Fourth Solo Album… Sublime” – Hot Press
“…a lovingly-crafted, gentle-paced gem” – Acoustic Magazine
“…a stunning album – songs for the soul, medicinal music to engage with the best part of us all. And more frankly than that – it is plain bloody beautiful.” – Folk Words