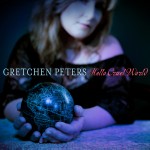 On her new album, Every Girl, Trisha Yearwood has covered Gretchen Peters song The Matador which appeared on her 2012 album, Hello Cruel World.

Although she took some artistic license with the lyrics, Yearwood told Rolling Stone that “The Matador” serves as a metaphor for her own relationship as the spouse of one of country music’s greatest showmen, Garth Brooks.

Here’s the video for Gretchen’s version of The Matador and you can hear Trisha Yearwood’s version below.