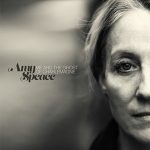 Amy Speace has released the video for the title track of her upcoming album Me And The Ghost Of Charlemagne. The video was premiered on Billboard who said “Amy Speace stuns on title track of new album”, while Rolling Stone featured the song and video in their 10 Best Country and Americana Songs to Hear Now section.

A modern folk-singer whose music nods to the genre’s 1970s glory days, Speace has spent two decades chronicling the high marks, heartbreaks, and hard roads of a life logged on the road. She’s been a tireless traveler, chasing the dream from the coffeehouses of New York City to larger stages across the globe.

The new album finds Speace focusing on the other side of that so-called dream. The real side, filled with an ever-shifting balance of struggle and joy. Produced by longtime collaborator Neilson Hubbard and recorded during the final weeks of Speace’s pregnancy with her first son, Me And The Ghost Of Charlemagne captures Amy Speace at her most nakedly honest, with sparsely-decorated songs that double down on her larger-than-life voice and detail-rich songwriting.