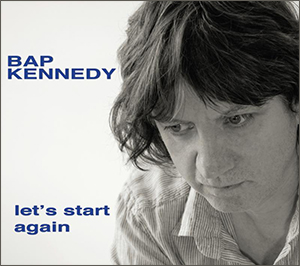 ‘Let’s Start Again’ (out 3rd Feb, 2014), the new album by Bap Kennedy, is his 6th solo album of original material. His original encounter with the record business was as lead singer and primary songwriter for cult Belfast rockers Energy Orchard, with whom he recorded 5 albums.

While Bap usually records in England and America, this time he wanted to bring together some of the top musicians in his native Northern Ireland to play on Let’s Start Again. The most local of the local talents is bass player and harmony vocalist, Brenda Kennedy, Bap’s wife. Brenda is also a regular member of Bap’s live band, as are two of the album’s other musicians, drummer Rabb Bennett and virtuoso guitarist Gordy McAllister.

After the Celtic melancholy of The Sailor’s Revenge, there is a more upbeat roots-y Americana feel to Let’s Start Again. The country-roots style of the record is something that Bap’s co-producer, Mudd Wallace first realised would suit Bap as far back as the early 80’s. At that time, Bap was a Belfast power pop punk and Mudd was producing Bap’s band, as well as the debut album of cult Belfast Americana band The Mighty Shamrocks. For the next 30 years, the Shamrocks’ album was to lie in the vaults, until 2012 when Bap and Mudd became involved in its eventual release. This was to be the spark that brought the two old friends back into the studio together to create Let’s Start Again.

Bap’s current live band has been touring extensively since the release of Bap’s last album, The Sailor’s Revenge (2012), in America, Italy, Germany, Holland, France, Norway and Switzerland, as well as the UK and Ireland. While in France, Bap recently played support for Mark Knopfler, who had produced and played guitar on The Sailor’s Revenge.

Knopfler is not the only high profile name Bap has worked closely with over the years: Van Morrison co-wrote the song Milky Way on Bap’s album The Big Picture. The same album features guest vocals from The Pogues’ lead singer Shane MacGowan; and his debut solo album, Domestic Blues was produced by Steve Earle, who was later to describe Bap as “the best songwriter I ever saw”.