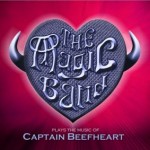 The new live album from the Magic Band is released on the 25th November and ahead of the release we have two videos filmed during the live performance at Under the Bridge in March. The thirteen track album features twelve original Don Van Vliet compositions and a Willie Dixon/Bo Diddley penned track, together forming a true musical testament to the legacy of the great Captain Beefheart.

The Magic Band Plays The Music Of Captain Beefheart – Live is available to pre-order from Propermusic.com, Amazon.co.uk and iTunes
Signed copies are available exclusively via Propermusic.com