Show of Hands have unequivocally become one of the leading forces in British folk. Steve Knightley and Phil Beer are respectively recognised as one of the UK’s best singer songwriters and one of its finest multi instrumentalists. Without frills or fanfares they have carved a unique niche built on a carefully constructed cottage industry and become one of the most in-demand bands on the circuit.

An alchemist couldn’t have come up with a more potent, magical mix than that of Phil Beer, who can, as The Scotsman observed, “play nearly every stringed instrument known to man” and the inspired Steve Knightley, described by broadcaster Mike Harding as “one of England’s greatest singer songwriters”.

With its arresting cover of a felled marionette, Battlefield Dance Floor is their 18th studio album. The 13-track album, their first key release in more than three years, brings eight keenly awaited new songs (and a co-write) from the pen of Knightley, widely acknowledged as one of the country’s most inspired and original songwriters.

Phil Beer is the ‘master decorator’ of the songs – a brilliant, consummate multi-instrumentalist while long term third member Miranda Sykes is back on board with her eloquent double bass and vocals after her sabbatical – and Cormac Byrne and his feted percussion skills (witnessed on last autumn’s UK tour) bring a vibrant fresh dimension to the party.

Rolling Stones collaborator Matt Clifford adds his keyboard skills to some tracks and an impromptu collective known as The Bridge Hill Shanty Men are the icing on the cake, weighing in with rousing choruses.

Possibly their most commercial release to date, Battlefield Dance Floor is an exuberant, lush, full-blooded album co-produced by the in-demand Mark Tucker and Knightley. It's an album of broad brushstrokes which mixes songs of despair and displacement, emphatic songs, tongue-in-cheek songs, poignant songs and carefully chosen covers into a classic Show of Hands package with wide appeal. It’s an album that successfully melds vintage Show of Hands and brand new material, infusing influences old and new and this time – as a four strong band – with even greater depth and panache.

Says Steve: “With the heartbeat and harmonies that Cormac and Miranda add, we are at last creating a sound we’ve dreamed of making for twenty five years!”

Show of Hands will showcase songs from Battlefield Dance Floor on their 22-date autumn-winter tour of England and Wales, find all of the dates below. 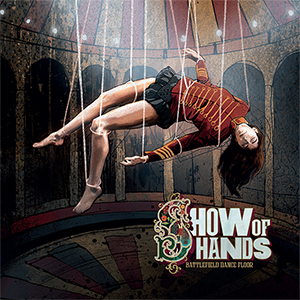