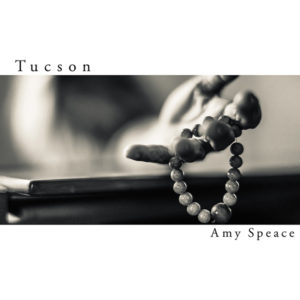 Out now on digital, CD out May 27.
Propermusic Amazon
Spotify Apple Music
iTunes
Find more ways to buy or listen

It took Amy Speace just a day and a half to record her new album, Tucson, out now on digital services (CD coming soon). Don’t think it’s some rush job, though — Speace spent most of her life finding her way to write it.

The award-winning, critically revered singer follows her acclaimed 2021 album, There Used To Be Horses Here, with a new, seven-song collection of Speace’s most intimate material yet. While long known for penning emotional, often personal folk songs with strong narrative bents, Speace lays herself bare on Tucson in a way she’s never done before, for an album that, in some ways, serves as a reintroduction to one of our finest songwriters, two decades into an already remarkable career.

"It’s a stunning and deeply affecting work, a catharsis for her and an epiphany for all who hear it."
Folk Radio UK
Read full review

“All of my records have an honest vulnerability, and touches of autobiography,” Speace says. “Especially the last two: Me and the Ghost of Charlemagne was about, well, it was about quitting music in order to be with my newborn son. And then There Used to Be Horses Here was about not quitting music, and about the year in between my son’s first birthday and my father’s unexpected diagnosis and death from pancreatic cancer. But I’ve never done an album like this.”

Speace recorded Tucson alongside Neilson Hubbard, Josh Britt and Ben Glover (collectively called The Orphan Brigade) whom she describes as her “musical soulmates.” The album traces its roots back to a pivotal, traumatic moment in Speace’s young life, when she was date raped at the age of 19 in her freshman year at college. The event happened while Speace, now a recovering alcoholic with over eight years of sobriety under her belt, was blacked out, and though she remembers little of the night itself, its effects quickly took a toll on her mental and physical health.

“He then slept with a friend of mine,” Speace says of her rapist. “Then I basically went into a decades-long spiral of shame, promiscuity and drinking and disassociating without realizing that what had happened to me was not my fault. I thought it was my fault and I had no idea why I was failing classes, throwing up every meal. It took a while to realize it was a rape and, through sheer force of will, I put it behind me and buried myself in overachievement. After the next summer I was like, ‘I’m fucking graduating magna cum laude.’ It was that, ‘You're gonna remember me,’ way of thinking.”

Trying to recover from that deeply violating act led Speace to harden herself, and to cloak her pain in humor and cynicism. That protective emotional armor Speace forged for herself, while clearly not preventing her from becoming a world-class songwriter, affected her creatively in ways that would reveal themselves decades later. “That's kind of who I was for the rest of my life,” she says. “Anytime something painful happened, I would be able to laugh it off and say, ‘Oh, yeah, what doesn't kill you makes you stronger. P.S., I’m killing life.’”

Behind the scenes, though, life seemed to be killing Speace. As she explains, despite “being in and out of therapy [her] whole life,” she struggled with “anger issues, being in shitty relationships” and “trying to make good personal choices.” In 2013, she found sobriety and says that decision led “something to shift.” Not long after entering recovery, Speace met her husband, with whom she had a child, her first, in 2018. Things had moved in a positive direction for Speace, but she still struggled with unresolved trauma, which was compounded by both postpartum depression and the death of her father. Her father’s death, especially, brought back painful memories, many of which form the foundation of Tucson.

“Part of my rape story is that my dad denied it and kind of called me a liar,” she says. “I repaired my relationship with him through recovery. I never had a conversation with him about that abandonment, but I just decided that I was going to accept him for who he was. And I was just going to spend a lot of time with him. I sat next to him during the [Brett] Kavanaugh trial, and I remember my dad saying, ‘What are all these women bitching and moaning about? This is a really great guy.’ And I just looked at my dad and I said, ‘I can't believe you don't remember what happened to me.’ And again, I kept it in check. Until he died. And then then I lost my voice.”

Tack on the COVID-19 pandemic which —in addition to creating its own brand of anxiety for most people, Speace included — greatly threatened her income as a touring musician. As Speace puts it, that’s when she “started raging,” but, to be fair, she’d always been raging, since she was a little girl; it had impacted most of her relationships and she, admittedly, had no idea the toll it was taking on her marriage. “There's ‘fight, flight and freeze’ with trauma, and I'm a huge fighter,” she says. “I love my family. I felt like my relationship was a huge gift from God. But we were stuck inside, and my depression and trauma got worse and my anger got worse and I was out of control and then, honestly, I became suicidal.”

That summer, Speace traveled to Tucson, AZ, to receive treatment for, as Speace shares, “trauma, complicated grief and depression” at a center called Cottonwood de Tucson, the name of which lends itself to the album’s gut-punch of an opening track. While her time at Cottonwood got off to a rocky start — “I didn’t want to be there,” she explains, “I wanted to go home” — Speace eventually found solace in both a piano for resident use and the quiet desert landscape surrounding the facility.

She soon began writing songs, beginning with “Cottonwood,” which grapples plainly with the long-lasting effects of the night of her rape. “Here I am face to the floor, again,” she sings, before offering a quiet plea for peace. “All the hurt I’ve carried ‘round, for 50 years it’s weighed me down,” she continues, with a slight quaver in her voice. “I felt more lost out there than found, there’s no one left to blame.” At the track’s crescendo, Speace offers excruciating details of her attack, and subsequent violations she allowed, common in trauma, before admitting that she’s “tired of this masquerade.”

The mask, and Speace’s armor, comes off for the remainder of the project, which never shies away from the raw vulnerability of that wrenching opening song. “If You Fall” is a promise to stand firm with other trauma survivors, inspired by a particularly meaningful friendship Speace experienced at Cottonwood. “Little Red,” with its plaintive acoustic guitar and a particularly aching vocal from Speace, uses the story of “Little Red Riding Hood” as an allegory for living as a woman in a predatory world. “Why I Wake Early” takes its name from a Mary Oliver poem and was written in the wake of the late poet’s death. And on closer, Bruce Springsteen’s “My Father’s House,” Speace recalls her own childhood through Springsteen’s words, for a cover that expertly laments the specific, disorienting pain of losing a parent.

In addition to supporting Tucson, Speace — ever honing her craft — is currently working to earn an MFA in poetry. Writing is a sacred, healing act for Speace, and it’s safe to say that Tucson is the kind of record that will offer a healing space for listeners, too. At the end of the day, Speace just wants her listeners to find peace and connection in her music.

“To stand in my truth and talk about it, finally — it’s not like, ‘Yeah, this happened, I’m fine,’” she says. “I still don't know what to make of this and it still affects me. But I'm working through it, and I'm able to look at it. So, I realized there’s power in speaking the truth. And if I can talk about it — and it’s scary — maybe it will give someone else hope, too.”