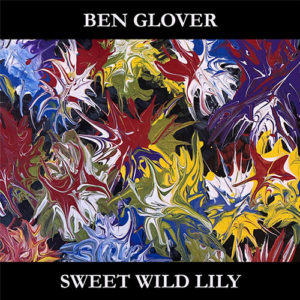 “I hadn’t planned to release anything in 2020,” Glover says, “yet in the early summer, I got on a writing streak and also revisited some older unrecorded songs. Spending time in the studio and recording filled that part of me that needed to stay engaged with creativity. So much connection was lost when touring was cancelled due to the pandemic, and as an artist that is something that I missed deeply. It felt important for me to keep making music during this time.”

“Sublime writing from a master songwriter at the top of his game. ‘Sweet Wild Lily’ is the sound of a Celtic soul digging deep into the southern soul. Get on board now before everybody else does.”
Ralph McLean (BBC)

“absolutely stunning… one of the finest Americana releases of the year.”
Maximum Volume Music – read review

“Glover’s writing gets better and better. That voice matures. The poetry gets more evocative…
The Sweet Wild Lily EP is a treat…”
Soul Surmise – read review

“A storyteller of the finest hue, using the medium of music to reel the listener in… (Fireflies Dancing) is one of the finest and deepest songs I’ve heard this year”
The Rocking Magpie – read review

“one of the year’s surprising yet so tantalising releases.”
Three Chords And The Truth – read review

“Please don’t ask me to pick a favourite. It’s impossible. They all have their own special magic.”
Folk And Tumble – read review

Ben says, “I took a new approach to the recording process this time. Previously I always made albums in intense, focused bursts, usually over ten days or so. This time I intended to let the recording take its own pace and spread it out over several months rather than days. I felt that it gave the songs more time to come to life and gave me more time to sense what direction we needed to take them.”

Integral to the sound of the EP is the guitar playing of Colm McClean. A first cousin and long time collaborator of Glover’s, McClean would record his parts in Belfast and then send them back to Nashville where Glover was based during the 2020 lockdown.

Collaboration has always been crucial to Ben’s musical path. The songs Sweet Wild Lily and Fireflies Dancing are solo compositions but Arguing With Ghosts and Broke Down were co-written with Songwriting Hall of Famer, Gretchen Peters (Arguing With Ghosts was also co-written with Matraca Berg). Gretchen also features on backing vocals on Broke Down. The pair have been writing together since 2013, with their collaborations ending up on each other’s respective solo albums.

“Gretchen and I wrote Broke Down back in 2013, but for some reason, I could never get the recording of it just right. It fascinates me how sometimes songs can be a challenge to wrestle with in the studio” remarks Glover. “I finally feel though that we nailed Broke Down on the EP.”

Fireflies Dancing was inspired by the very scene that the first verse talks about. Glover explains, “I was spending some time in Mississippi in July, to get a break away from Nashville. One evening I was sitting on the porch with the guitar and there was a beautiful display of fireflies in the dusk. I played a chord and sang over it “Fireflies dancing on a July night’ and the song spilled out in about thirty minutes. There is a sense freedom in that song that appeals to me, especially in midst of 2020 during which times have felt very restrictive.”