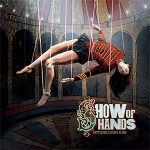 The winners of the 2019 Fatea Awards were announced last Friday in a two hour radio special hosted by Blues & Roots Radio and we were thrilled to see Show Of Hands announced as the recipients of the Lifetime Achievement Award.

Following the announcement on the show, Fatea said on Twitter that Show Of Hands “have done so much for getting acts out of the West Country and onto the national scene as well as bringing a lot of people into the broader acoustic spectrum.”

Congratulation to Cormac Byrne, Show Of Hands’ percussionist on their latest album Battlefield Dance Floor, who was also announced as the Instrumentalist of the Year.