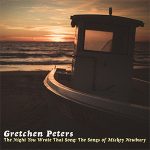 Next May, following five dates in the Netherlands, Gretchen Peters returns to the UK for a short run of dates which will see her playing venues including the Tivoli Theatre in Wimbourne, London’s Kings Place, The MAC in Belfast and more. Gretchen’s European tour dates have now been rescheduled for 2021.

Feb 2020 Update: Gretchen has announced her new album ‘The Night You Wrote That Song: The Songs of Mickey Newbury’, will be released on May 15, find out more, listen to the title track and pre-order here.

Find all of Gretchen’s upcoming European dates below.