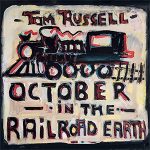 Tom Russell has released a new video for the song ‘Highway 46’ from his latest album October In The Railroad Earth.

The song is meant as a nod towards the 50’s and 60’s music out of Bakersfield. Tom says “I heard Bob Dylan on the radio in 1962 the same night I heard Buck Owens. I thought it was all the same – sort of hillbilly/folk music with voices that cut through the fog. Buck Owens, Merle Haggard, Wynn Stewart…voices from a Wurlitzer jukebox. Telecaster guitars and pedal steels. Searing treble. Highway 46 runs from the California Coast towards the San Joaquin Valley – the road where James Dean died in a car crash.”

Read the reviews for October In The Railroad Earth