We were thrilled last week when the 2019 GRAMMY nominees were announced and both Joan Baez and Mary Gauthier had been shortlisted for the Best Folk Album, Baez for Whistle Down The Wind and Gauthier for Rifles & Rosary Beads. 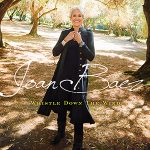 Whistle Down The Wind, is Joan Baez’s first new studio album in a decade and was produced by three-time Grammy Award winner Joe Henry and recorded over ten days of sessions in Los Angeles. The album gathers material by some of Baez’s favourite composers and was described as “one of her finest albums, a sensitive, lilting collection of songs that reflect the tumultuous present while keeping an eye on the past” by Uncut Magazine in their 8/10 review.
Listen, buy or download Whistle Down The Wind

Mary Gauthier’s tenth album, Rifles & Rosary Beads features eleven songs co-written with and for wounded veterans. Eleven of the nearly four hundred songs that highly accomplished songwriters have co-written as part of the five-year-old SongwritingWith:Soldiers program. In their 9/10 review, Americana-UK said “It is certainly Gauthier’s masterpiece, and a record that genuinely has helped to change lives, a wonderful piece of art.”
Listen, buy or download Rifles & Rosary Beads

Other nominees in the Best Folk Album category include Dom Flemons for Black Cowboys, Iron & Wine for Weed Garden and Punch Brothers for All Ashore.