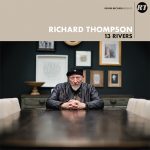 13 Rivers, the new album from Richard Thompson, was released one week ago today and has garnered critical acclaim already with many reviewers regarding it as one of Thompson’s best albums in recent years. You can read some of the review highlights below and follow the links to the online versions for the full reviews (where available).

Richard Thompson returns to the UK next month for a run of 19 dates which will see him performing at venues including Liverpool Philharmonic Hall, the Barbican Centre in London, The Sage in Gateshead and many more. You can find all of the dates and ticket details here.

“13 Rivers is a sparse, raging and noisy record, with Thompson’s guitars jagged and biting”
Uncut – 9/10

“…this may be Richard Thompson’s most creative album in decades.”
MOJO ★★★★

“Compositions like ‘The Dog In You’ and ‘No Matter’ stand comparison with his recent best and prove that, as he hits 70, RT is still swimming strongly against the current”
Record Collector ★★★★

“..marries his two great skills of penetrating songwriting and guitar heroics”
i Newspaper ★★★★

“..13 Rivers is a notable achievement in the justly lauded career of the English folk rock legend.”
Daily Mirror ★★★★

“there is a connected flow to 13 Rivers, which seamlessly marries his two great skills of penetrating songwriting and guitar heroics.” – Read full review
The Scotsman ★★★★

“Every song on 13 Rivers is infused with superb guitar from heavy blues licks to light picking. It’s Thompson at his absolute best. It’s almost as if he was happy.”
NoDepression

“a powerful, intelligent, multi-faceted and beautifully performed selection of consistently strong pieces. It’s also a ton of fun and a genuine high point in Thompson’s career; a record that should be chewed on and discussed for many years to come.” – Read full review
Folk Radio