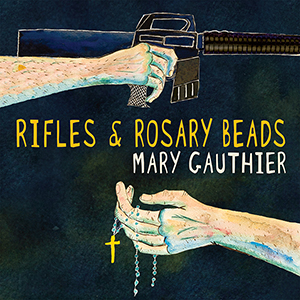 Mary Gauthier has released a new video for Bullet Holes in the Sky, the first song taken from her upcoming album Rifles & Rosary Beads (out 26 January 2018).

All eleven songs on the new album have been co-written with and for wounded veterans as part of the five-year-old SongwritingWith:Soldiers program. Participants of the program have shared that the experience of songwriting was life changing for them, some even said life saving. Something about writing that song – telling that story – is healing. What program co-founder Smith calls post-traumatic-growth.

Here’s what Gauthier says about the song:

“Nov. 11th is Remembrance Day in the UK. Veterans Day in America.
To all who’ve served, and their families, I thank you.
I’m releasing the first song from Rifles & Rosary beads this morning: Bullet Holes In the Sky.
I co-wrote it with US Navy Desert Storm Veteran Jamie Trent.
It was born when Jamie told me that Veterans get free breakfast at the fast food restaurant Waffle House on Veterans Day, with an active military ID.
The song captures the thoughts of a Veteran sitting in a Waffle House alone, as the Veterans Day Parade rolls by.
The feelings deep inside the service member are complex, difficult to express.
There’s pride in being of service. Faith in God. Patriotism.
Sorrow, for those who were lost.
And the feeling of being sadly resigned to the fact that these wars never end, they just keep coming.
I hope you like the song.”
Mary Gauthier