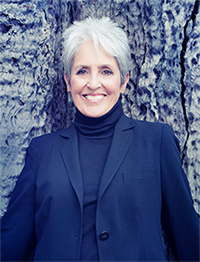 Congratulations to Joan Baez who will be inducted into the Rock & Roll Hall of Fame next April. Other inductees in the performer category for the Rock Hall Class of 2017 include Electric Light Orchestra, Journey, Pearl Jam, Tupac Shakur and Yes whilst Nile Rodgers will receive the award for Musical Excellence.

The Rock & Roll Hall of Fame Foundation began over 25 years ago when leaders in the music industry joined together to celebrate the music and musicians that changed the world. With that, one of the Foundation’s many functions is to recognize the contributions of those who have had a significant impact on the evolution, development and perpetuation of rock and roll by inducting them into the Hall of Fame.