When we originally discussed the overall sound for the Ian Hunter 30 disc box set, Stranded In Reality, we decided we should be faithful to the sound of the original recordings and that we would not artificially enhance that sound, so we have purposely avoided going down the “brickwalled mastering” route therefore avoiding the screechy sound that you and most other people hate. Original tape masters from many of the licensors has helped us immensely.

We have obviously pulled together a vast amount of archive material, live and in the studio and we have been judicious in our choices of recordings and again have been sensitive in the way that they have been mastered, trying to avoid all of the nasty compression techniques.

Note that the clips provided here are compressed so that we are able to deliver them to you over this medium.

Clip 1: YOUR WAY
Recorded at The Sentrum Scene, Oslo, January 2002 but not included on the resultant album Strings Attached. Ian notes “Andy York and I were not too keen on the performance at the time. A year or two later it sounded really good to us, we were looking at each other and saying ‘Why did we dislike it’?”

Clip 2: SAN DIEGO FREEWAY
Taken from our Experiments CD which is wholly made up of previously unreleased outtakes and demos from the personal archive of Ian Hunter. Gold dust ! Ian Hunter “Songs just come to me. This was just fun. Get in line!”

Clip 3: WHERE DO YOU ALL COME FROM
Recorded at the Mick Jagger Centre, Dartford, England in 2008, Ian had not played this song live since 1973 ! It of course being the original B-side of Roll Away the Stone.

Find out more details and place your pre-order at
Propermusic.com 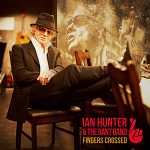