BluesFest London will see Bill Wyman celebrate his 80th birthday in the only way he knows how – on stage with an amazing line-up of friends and guests. Bill will be performing alongside his Rhythm Kings on the night with guests including Robert Plant, Mark Knopfler, Bob Geldof, Imelda May and Mick Hucknall already confirmed to appear and more to be announced.

BluesFest director Leo Green commented on the birthday gala celebrations “This Bill Wyman concert is shaping up to be one of the gigs of the year. The addition of Robert Plant to an already monumental lineup is a clear indicator of the vast influence this incredible musician has had on the music world and we’re delighted that he’s chosen to celebrate this milestone birthday with us – who knows who else might turn up on the night to jump up onstage.” 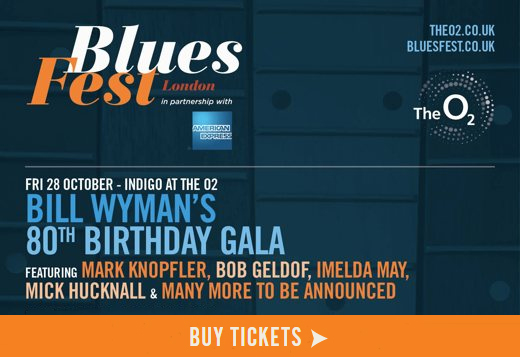 Bill Wyman’s latest album Back To Basics is available now from Propermusic, Amazon, iTunes and all good record stores. You can also stream the album on Spotify, Apple Music, Deezer etc.