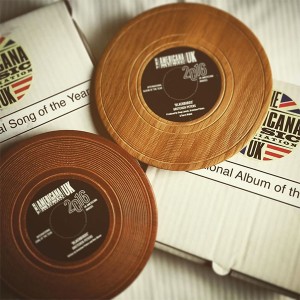 A huge congratulations to Gretchen Peters who took home not one, but two awards at last nights inaugural Americana Music Association UK Awards. Peters won the International Song of the Year, presented by Downton Abbeys Elizabeth McGovern, for the song Blackbirds which was co-written with Ben Glover. This was followed by Blackbirds (the album) winning the International Album of the Year presented by Bonnie Raitt.
Commenting on Facebook soon after the show, Gretchen said “It’s not often that I’m speechless, but tonight I am. Thank you The Americana Music Association UK for ‪#‎internationalalbumoftheyear‬ & ‪#‎internationalsongoftheyear‬ for Blackbirds. My heart is full.”

Gretchen’s latest album, The Essential Gretchen Peters was released last Friday and is available on Propermusic, Amazon, iTunes, Spotify and from all good record stores.