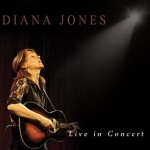 Diana Jones will be heading over to the UK in April for an 8-date tour which will include dates at Glasgow’s CCA, King’s Place in London and The Tunnels in Bristol.

The tour will follow Diana’s new album ‘Live In Concert’ which is due for release on the 19th February. This career retrospective features 18 songs and opens with Diana’s debut European performance at the 2007 Blue Highways Festival in Utrecht, NL, accompanied by Beau Stapleton on mandolin, tenor guitar and harmony vocals, and continues with audiences in venues across the UK, Europe, Ireland and the US providing the back drop for Diana’s literary songwriting and heartfelt vocal delivery, which is spellbinding.