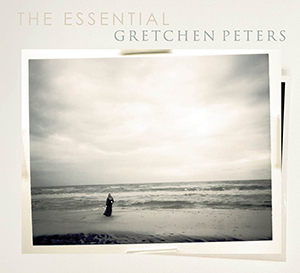 On ‘The Essential Gretchen Peters,’ this very special Nashville-based singer-songwriter combines career-defining tracks with rare outtakes, demos, and B-sides to provide a two-disc snapshot of her remarkable journey as a singularly fearless and creative talent.

“I remember going on my first radio tour for my debut album and the guys at the radio stations would say, ‘So you’re a songwriter, and now you want to be an artist?'” remembers Gretchen Peters.

In hindsight, it’s a laughable distinction. Over the last three decades, Peters has proven to posses one of the most indelible voices in country and roots music in addition to wielding one the genres’ most enduring pens. But in 1996, as she crossed the invisible Music City barrier between writer and performer, few could have predicted what lay ahead.

Peters first arrived in Nashville in 1987 and quickly established herself as a songwriting force to be reckoned with and tracks recorded by some of the biggest names in country music. She landed her first #1 with George Strait’s rendition of her “Chill Of An Early Fall,” garnered her first GRAMMY Nomination and CMA Song of the Year win with Martina McBride’s recording of “Independence Day,” and penned hits for Patty Loveless, Shania Twain, Bryan Adams, Trisha Yearwood, Jimmy LaFave, and Etta James among others. “If Peters never delivers another tune as achingly beautiful as ‘On A Bus To St. Cloud,'” People Magazine wrote, “she has already earned herself a spot among country’s upper echelon of contemporary composers.”

All the while, though, she had bigger plans for herself.

“Performing my own material was always in my sights from the time I moved to Nashville,” Peters explains. “I didn’t separate the writing from the performing from the recording in my mind. I always saw myself as a singer-songwriter, and that was all part of the job.”

Riding the momentum from her remarkable success, Peters signed her first recording contract in 1996 with an independent label and released her debut album, ‘The Secret Of Life.’ While it fared well critically, Peters fell between the cracks of an industry hungry for easy-to-categorize products to feed the machine. Marketing a nuanced, mature storyteller – one who penned songs like the album’s bittersweet title track and the stirring “When You Are Old” (both of which appear on ‘The Essential’ Disc 1) – to mainstream country radio proved to be fruitless, and when the label later folded, Peters bought back the master recordings and vowed to maintain control for the rest of her days in the business, becoming an early adopter of the now-common process of self-releasing albums through licensing and distribution partnerships.

Despite the early commercial stumble in the US, though, Peters found a different appreciation for her songs in the UK, where she earned the admiration of early champions in radio and press, like the legendary BBC host Bob Harris.

“The first time I went over, I played four little gigs with no more than 40 or 50 people at any of them, maybe less,” she remembers. “But I immediately felt completely comfortable in my skin. I felt like those audiences didn’t expect or want me to be anything other than who I was. Everything that wasn’t working here in the States was working really well over there. It was like stepping through the looking glass.”

Over the next twenty years, Peters would self-release seven more studio albums on both sides of the pond (including a collaboration with Tom Russell titled ‘One To The Heart, One To The Head’) and see her profile in the UK reach a new peak with 2015’s ‘Blackbirds,’ which debuted at #1 on the UK Official Country Album Chart. Uncut hailed her as “one of Nashville’s greatest talents of the past two decades,” while The Sun called the album “an Americana tour de force.” The record led to a sold-out UK tour, as well as spots on massive European festival stages from Glastonbury to Roskilde.

All the while, the US was catching up to what they’d been missing out on in their own backyard. NPR called her 2012 release ‘Hello Cruel World’ “the album of her career,” while Rolling Stone dubbed “Blackbirds” “one of the most affecting murder ballads since Bruce Springsteen’s ‘Nebraska,'” and in 2014, she was inducted into the Songwriters Hall of Fame.

While ‘The Essential Gretchen Peters’ collects some of the most memorable moments from her inimitable catalogue, it also offers a unique window into Peters’ process. Highlights include rare recordings of her own takes on classics like “The Chill Of An Early Fall,” “On A Bus To St Cloud,” and “Independence Day,” as well as a previously unheard collaboration with Bryan Adams and unreleased demos and outtakes from throughout her career. Listeners can also trace the evolution of her work with keyboard player Barry Walsh, who began recording on Peters’ demos in 1990 and appears on every one of her albums (the two were married in 2010).

“The first real UK tour I did with Barry was in 2001, and when we started playing live together it really became apparent that we had this sympathetic way of playing music,” Peters explains. “We were always able to telegraph to each other what we were going to do.

At this point now, 25 years since we first started recording together, it’s like we play with one brain, but even back then, I felt like we had some kind of language that we were speaking onstage.”

Though Peters is beloved as a songwriter of the highest calibre, she also uses the ‘The Essential’ collection as an opportunity to showcase her talent for interpreting the work of others that have influenced her, including a stunning cover of John Lennon’s “Love” and a gorgeous rendition of the Rolling Stones’ “Wild Horses” performed by Wine, Women & Song, her touring group featuring fellow Nashville icons Suzy Bogguss and Matraca Berg.

“Once the idea for this collection came up, I took the title pretty seriously when I was deciding on what to include,” explains Peters. “Regardless of when, how, or if they were released, I wanted to choose tracks that really felt essential to who I am, the closest, absolute right-down-to-the-bone expressions of myself.”

Gretchen Peters is a songwriter and an artist. Both sides are essential to her identity, and one listen to this collection makes it clear that her extraordinary body of work is indeed essential listening for the rest of us.