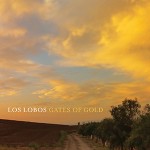 In this new video from Los Lobos, the band discuss the ideas behind the title of their new album Gates of Gold, the recording of the album and their new biography ‘Dream in Blue’ written by Chris Morris, formally of Billboard Magazine, which is out soon.

Gates of Gold is the bands first collection of new songs since 2010s Tin Can Trust. Los Lobos are entering their fifth decade, as the humblest of musical icons, having racked up countless accolades for their uncompromising artistry. With four Grammys in hand and the respect and admiration of their musical peers, the band still hearken back to their beginnings as “the soundtrack of the barrio” and remain a cultural touchstone for a community.

Gates of Gold is available now:
Buy or stream here