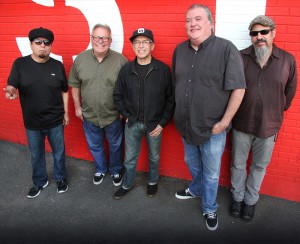 “We’re a Mexican American band, and no word describes America like immigrant. Most of us are children of immigrants, so it’s perhaps natural that the songs we create celebrate America in this way.” So says Louie Perez, the “poet laureate” and primary wordsmith of Los Lobos, when describing the songs on the band’s new album, Gates of Gold.

Unlike many bands that write, gather and catalog material between studio releases, Los Lobos prefers to create their magic on the fly when they decide it’s time to record. Perez says, “We never come in with a cache of 20 songs. Our thing is to write as we’re recording. It’s like starting with a blank canvass every time.”

Los Lobos were presented with the Lifetime Achievement Award for performance at last nights Americana Music Honors and Awards Show at the Ryman Auditorium in Nashville where they also performed ‘One Night In America’ from their 1987 album ‘By the Light of the Moon’.

Gates of Gold is available now from Propermusic, Amazon, iTunes, Spotify and all good record stores.