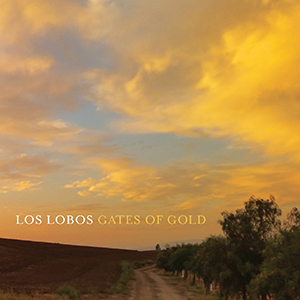 Los Lobos, the Grammy winning East L.A. legends comprised of David Hidalgo, Louie Perez, Cesar Rosas, Conrad Lozano and Steve Berlin, are back with an all new full length studio album, ‘Gates of Gold,’ which will be released September 25th. Their first collection of new songs since 2010, the album was produced by the band who continue to hone their multi-faceted sound and fresh storytelling. The 11 tracks showcase a band that continues to keep it real. Their songs are snapshots of true life moments with themes ranging from the immigrant experience in America to melancholic ruminations on impending mortality. The music is as dynamic, eclectic yet distinctive as ever. Thoughtful, darkly romantic and spiritual lyrics are enhanced by slow burning blues rock, impressionistic soul, traditional Mexican folk music or straight ahead garage band jams. In addition, a new biography of the band, ‘Los Lobos – Dream in Blue’ written by Chris Morris, will be released in September by the University of Texas Press.

Los Lobos are entering their fifth decade, as the humblest of musical icons, having racked up countless accolades for their uncompromising artistry. With four Grammys in hand and the respect and admiration of their musical peers, the band still hearken back to their beginnings as “the soundtrack of the barrio” and remain a cultural touchstone for a community. Their accomplishment is reflected in the effortlessly spontaneous approach to recording. Says Cesar Rosas: “When I listen to our catalog, doing things more spontaneously in the studio has led to some of our best work.” Adds Louie Perez: “Unlike many bands that write, gather and catalog material between studio releases, Los Lobos prefers to create their magic on the fly when they decide it’s time to record.”