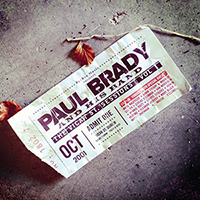 A big congratulations to Paul Brady who has gone straight into the Irish Independent Album Chart at Number 1 and is the third highest new entry in the overall Irish album chart at number 4.

Brady is one of Ireland’s most highly regarded and successful artists. Often classified as a musicians’ musician, his songs have been covered by a huge array of major artists, amongst them Tina Turner, Cher, Carole King, Art Garfunkel, Bonnie Raitt, Joe Cocker, Cliff Richard, Trisha Yearwood and Phil Collins and, closer to home, Ronan Keating, Joe Dolan, Dickie Rock, Maura O’Connell, Liam Clancy and Mary Black. Songs such as The Island, Crazy Dreams, Nothing But The Same Old Story, Nobody Knows, Follow On, The Long Goodbye, The Homes of Donegal and Paradise Is Here have, over the years, given joy and emotional sustenance to generations of Irish at home and abroad.

The Vicar St. Sessions Vol. 1 is out now:
Buy or stream