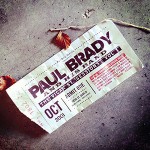 Paul Brady appeared on Ireland’s Late Late Show last week where he spoke to Ryan Tubridy about his successful career, performed some of his best know hits and spoke about his upcoming album ‘The Vicar St. Sessions Vol. 1’. For the next couple of weeks you can watch the full interview on the RTE website here.

Paul also performed ‘The Lakes of Pontchartrain’, a song which originally appeared on his first solo album ‘Welcome Here Kind Stranger’ and was later re-recorded for his Best Of album ‘Nobody Knows’.

The Vicar St. Sessions Vol. 1 is out now
Buy or stream