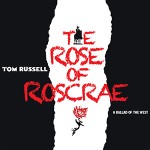 Tom Russell’s latest offering ‘The Rose of Roscrae’ has been out for just over a week now and is already being rated by many as a contender for Album of the Year. The much anticipated double-album folk opera features a who’s who of legendary Americana icons including Johnny Cash, Fats Kaplin, Barry Walsh, Jimmy LaFave, Gretchen Peters, Ramblin’ Jack Elliott, A.L. “Bert” Lloyd, Eliza Gilkyson, The McCrary Sisters, Dan Penn, Gurf Morlix and many, many more.

The Rose of Roscrae is available now
Buy or stream

We’ve rounded up a selection of some of the best reviews of the new album so far below.

“it could just be and the single most important Americana release of all time.”
– Folk Radio UK

“an album of breathtaking scope and ambition”
– FATEA

“Everyone that has a remote interest in American music will be overawed by this. Just stunning.”
– The Afterword