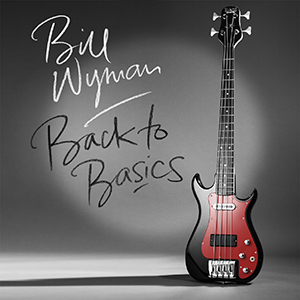 Out now:
Buy or Listen

Most artists put out a record every couple of years. Occasionally they leave it a decade or so or, at a push, even two. But 33 years… that’s going some. Unbelievably, it’s been that long since Bill Wyman, illustrious ex-Rolling Stone bass player, released his last UK solo CD. And Back To Basics is only his fourth UK solo album.

Not that the man’s been idle, far from it… Bill Wyman is a man of many parts.

Since quitting the Stones at their peak in 1993 having spent 31 years with them, he has been the author of seven learned books, a globally exhibited photographer, a metal detecting expert with his own brand of metal detector, a producer, a composer for film and TV and the founder of the very successful Rhythm Kings who release CDs and tour regularly.

It was only when archiving old demos last year he realised he had around 60 songs he’d never released… and the notion of Back To Basics came into play. He chose three songs that needed reworking and did just that. He put them together with a bunch of brand new songs and went into his studio to record them.

“Initially I thought I’m a bit old for this but then I thought all the old blues musicians played till they dropped so why don’t I give it a go…” B.W.

On June 22nd, the result of that labour, Back To Basics, hits the streets. The CD comprises 12 tracks, nine of which are brand new songs, while the digital version also features a bonus track, ‘Exciting’.

Back To Basics is unashamedly stripped back. The snappy lyrics are refreshingly audible and the instrumentation is clean, subtle and accomplished.

It’s fair to say, in fact, that Back To Basics does exactly what it says on the tin.