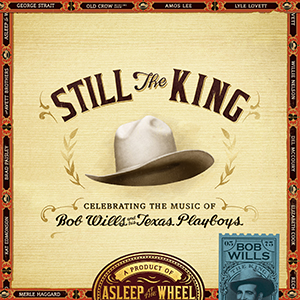 Asleep At The Wheel brings together old friends, superstars and a new generation for ‘Still The King: Celebrating the Music of Bob Wills and His Texas Playboys’ – out March 2nd 2015.

“I think the… Western swing, or whatever you want to call it, will slack off for a little while and then I think some of these younger boys will come out here one of these days with a golden voice and it’ll build again.” – Bob Wills.

Nine-time GRAMMY award-winners Ray Benson & Asleep at the Wheel honour the legendary Bob Wills — one of the few artists in history to be inducted both into the Country Music and Rock & Roll Hall of Fame – with their forthcoming tribute album Still The King: Celebrating the Music of Bob Wills and His Texas Playboys, out March 2 on Proper Records. For over 40 years, Ray Benson & Asleep at the Wheel have been the chief practitioners, conspirators and caretakers of Western swing, carrying Wills’ traditions well into the 21st century, reaching both their contemporaries and the next generation of artists inspired by the great bandleader. This album marks the band’s third full-length Bob Wills tribute album following 1998’s Ride with Bob and 1993’s A Tribute to the Music of Bob Wills, with four GRAMMY awards and over half a million copies sold collectively. The new album features genre-spanning collaborations with critically acclaimed artists, old friends and new favorites including Willie Nelson, Brad Paisley, Jamey Johnson, Merle Haggard, George Strait, The Avett Brothers, Amos Lee, Old Crow Medicine Show, Lyle Lovett and Kat Edmonson, among many others.

Widely considered “The King of Western Swing,” Bob Wills (1905-1975) and his Texas Playboys performed thousands of shows across the United Sates for nearly six decades and recorded prolifically in the late ‘30s and early ‘40s. Early stars of American country music, Bob Wills and His Texas Playboys were a dance band with a country string section that played pop songs as if they were jazz numbers. “After 45 years of travelling and playing, it still amazes me how well this music, born in the 1920s and ‘30s, thrives in the present day,” says Benson. “The artists playing and singing on this collection range in age from folks in their 20s to former Texas Playboys 92-year-old Billy Briggs and 86-year-old Leon Rausch…certain evidence that Western swing music is alive and well as it cruises through the next millennium.” Bob Wills was inducted into the Country Music Hall of Fame in 1968, the Nashville Songwriters Hall of Fame in 1970, the Rock & Roll Hall of Fame in 1999 and the National Fiddler Hall of Fame in 2007.

Based in Austin, Asleep at the Wheel formed in Paw Paw, West Virginia in 1970. Since their inception, the band has won nine GRAMMY awards, released more than 20 studio albums and charted more than 20 singles on the Billboard country charts. In 1971, the band signed their first record deal after Van Morrison mentioned they “play great country music” in an interview in Rolling Stone. Their debut record, Comin’ Right At Ya, was released in 1973 on United Artists. The release of Texas Gold in 1975 brought the band national recognition, with the single “The Letter That Johnny Walker Read” becoming a top-ten country hit. The band has been awarded “Touring Band of the Year” (CMAs, 1976) and the “Lifetime Achievement in Performance” (Americana Music Awards 2009). In 2010, they earned a GRAMMY nomination in the newly minted Best Americana Album category for their critically acclaimed Willie & The Wheel, on Bismeaux Records. Owned by Ray Benson, Bismeaux Records has won “Best Local Record Label” three years consecutively in the Austin Music Awards. In 2007, Benson performed with Carrie Underwood & Johnny Gimble on the GRAMMY Awards Telecast in a special GRAMMY Salute to Bob Wills.