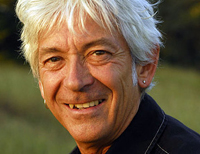 We are deeply saddened to report the passing of Ian McLagan. Aged 69, he died on December 3, 2014, surrounded by family and friends in his adopted hometown of Austin, Texas, following a stroke the previous day. He had recently toured the UK and was full of his youthful exuberance. Ian was scheduled to begin a North American on December 3rd, opening for labelmate Nick Lowe.