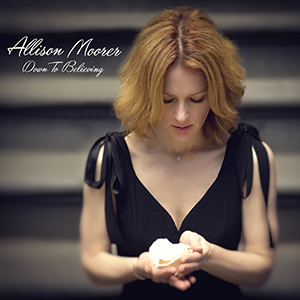 The Academy and Grammy Award nominated songstress Allison Moorer is set to release her Proper Records debut, Down To Believing, on March 16. Produced by longtime friend and collaborator, guitarist Kenny Greenberg, the album was recorded over two years in Nashville while Moorer commuted back and forth from her home in New York City. Her eighth studio recording since her 1998 debut Alabama Song, Down To Believing is her most personal collection of songs to date; one in which Rolling Stone has already called “brilliant and extraordinarily candid.”

The 13-song set is in many ways a sequel to Moorer and Greenberg’s second collaboration, the acclaimed 2000 album The Hardest Part. At the time of its release, Moorer often acknowledged the inspiration her parents’ relationship had on that album. Fifteen years later, she’s sifting eloquently through her modern day life as the inspiration for Down To Believing’s intensely personal song cycle.

The recording of Down To Believing began in January of 2012, the same month her son John Henry received a formal diagnosis of autism. The song “Mama Let The Wolf In,” is her response to that diagnosis. Speaking to Rolling Stone, Moorer said of the song, “As a parent, whatever your children go through I think there’s a certain amount of it that you feel responsible for, even if you know that it has nothing to do with you…When you can’t protect them from going through something that’s hard, you feel responsible for it…Basically the song is channeling that energy and expressing that extreme frustration at not being able to protect him. It makes me feel very powerless.”

Of the title track, one about the dissolution of her marriage to singer songwriter Steve Earle, Moorer says, “‘Down To Believing’ is quite possibly one of my best songs, one of the most honest songs about marriage.” She continues, “Obviously, this is a record about family and relationships. ‘Blood’ is about my sister (singer songwriter Shelby Lynne). It’s about loving someone unconditionally and always having your arms open to them no matter what. Being able to reflect on your own experience and put it in a common language so that people can commune is what the job of a songwriter is. I’m prouder of these songs than any I’ve ever written.”

Moorer’s 1998 song, “A Soft Place To Fall,” was included on the soundtrack to the feature film The Horse Whisperer, which led to an appearance in the film itself, as well as an Academy Award nomination for Best Original Song. The opportunity gained her worldwide attention and set the stage for her career. Moorer has been featured on releases by Joan Baez, Kid Rock, The Chieftains, while her songs have appeared on records by Miranda Lambert, Steve Earle and more.

She starred in the 2008 play Rebel Voices, based on Howard Zinn and Anthony Arnove’s best-selling book Voices of a People’s History of The United States and also appeared in the 2009 film The People Speak. The film was presented by the History Channel and was inspired by Zinn’s A People’s History of The Unites States. It also featured Bob Dylan, Morgan Freeman, Bruce Springsteen, Danny Glover, Matt Damon and more.