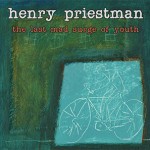 ‘True Believer’ is the second track on Henry Priestman’s new album ‘The Last Mad Surge of Youth’ and features both the co-writing talent of the Grammy-nominated John Beck, and a choir of school children from one of Henry’s school-songwriting workshops. Along with the first track ‘At The End Of The Day’, it creates a two-part opener to the album.

Would you like Henry to come and perform a private gig at your home or function, garden party, wedding or whatever you like?

Henry has recently started playing private house-concerts and finds these some of the most enjoyable gigs he does. Though occasionally a function room is booked (for a special occasion, eg a 40th/50th or even, umm, 60th!), often it’s just Henry stood with his guitar in the corner of someone’s living room, (or kitchen; see pic below) no mic, no PA… have a whip-round, get a gig in your own front room – no driving, no parking, no hassle – surrounded by your friends.

Henry offers a unique twist to the customary house-gig scenario: so far at every house-gig he’s done, he has managed to cajole someone from the party to come up and join him on a song or two (or more…!) on guitar, vocals, whatever.

HOW TO BOOK: To enquire about fees, and about a booking for a house concert/function/wedding, either contact Henry through his Facebook site by leaving a message (or posting on his wall, and we’ll get back to you) or email here.

‘The Last Mad Surge of Youth’ is available now
Buy, download or stream