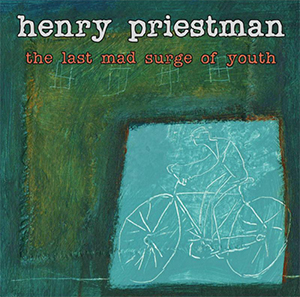 After three years in the making, Henry Priestman’s ‘The Last Mad Surge of Youth’ will be unleashed on UK listeners on 17th February 2014 through Proper Records. Eclectic, introspective and compelling, it was worth every second of the wait.

Released in 2009 on Island Records, Priestman’s first solo album, ‘Chronicles of Modern Life’, earned him plaudits as a major songwriter.

The album’s opener ‘At The End of The Day’, co-written with singer/songwriter Lotte Mullan (who also provides harmonies) was written for Henry’s mother. It couples well with ‘True Believer’, which features both the co-writing talent of the Grammy-nominated John Beck, and a choir of school children from one of Henry’s school-songwriting workshops, to create a two-part opener to the album. A fall and rise that hints at the level of detail that’s gone into an album that masterfully tugs on and releases the heart strings. ‘Valentine Song’ showcases Priestman’s knack with creating gripping, cinematic and emotive songs. It has been transformed into the central theme of the film Kismet Diner, winner of first prize at the 2013 Manhattan Short Films Festival.

The album flits between angry fiddle-laden stomps (Goodbye Common Sense), introspective singer/songwriter (At The End of The Day, and the title track) and blues–tinted pop (Rant ‘N’ Rave). That it’s so eclectic should be of no surprise for an artist whose debut topped Amazon’s Folk and World music chart, whilst at the same time been described as”music for grumpy old men” by Radio 2’s Johnnie Walker.

Whilst creating ‘The Last Mad Surge of Youth’, Henry has been playing many housegigs and also holding songwriting workshops at schools around the country, both of which will serve as good preparation for heading back to the road for a nationwide series of live dates in February, March and April 2014 to coincide with the release of the album.

Henry’s varied career has seen him open for the Sex Pistols, tour with The Who (with his 1st band, Yachts), and write every song on a triple platinum selling album with The Christians. To say nothing of music for ads, BBC TV Wildlife, XBOX &amp production work. Since the start of his solo career he has so far mined a similar rich vein of diversity and this latest album seems no exception.

‘The Last Mad Surge of Youth’ is a timely and well-constructed album, a voice for all the punks, rockers & folkies that have grown up and are still a little bit angry!