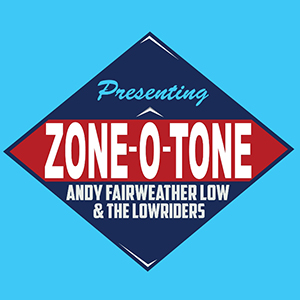 Fairweather Low came to prominence in the late Sixties as the lead vocalist with Amen Corner and scored several hits, including the number 1 “(If Paradise Is) Half As Nice”. He went on to enjoy a successful solo career, and enjoyed another huge hit with “Wide Eyed And Legless”. But his solo career was put on hold as he became increasingly popular as a sideman and soon became known as the “ultimate guitarist to the stars”, building an extraordinary reputation that has endured to this day as he’s played a crucial role working with the likes of Eric Clapton, The Who, George Harrison, Roger Waters, Bill Wyman and many more.

Fortunately for us, Andy has somehow found time to make a brand new record of his own. Zone-O-Tone features twelve new songs which draw heavily on his diverse musical influences. The musicians featured on this terrific project are also touring with him from October and are a who’s who of the best players on the rock scene. Joining Andy is Paul Beavis on drums (Thea Gilmore, Robbie Macintosh & Sunday All Over The World), Nick Pentelow on saxes and clarinet (Roy Wood, Roger Chapman and Gary Moore) and long standing associate Dave Bronze on bass (Clapton, Concert For George, Dear Mr Fantasy tribute to Jim Capaldi).

“‘Zone-O-Tone’ contains twelve new songs I’ve written that were inspired by the music of Stax and Atlantic soul, The Four Aces, Josef Locke, Johnny Kidd, Lonnie Donegan, The Shadows and many more. I am of my time, so are the songs and so is this album!” – Andy Fairweather Low.

“A tenderness wraps its arm around a varied mix of soul, folk, country and blues…A cool, composed return.” – Guitar & Bass