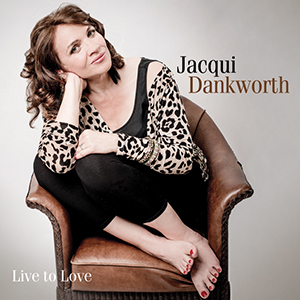 Following the success of 2011’s ‘It Happens Quietly’, which received widespread critical acclaim and topped jazz charts around the world, the award-winning vocalist Jacqui Dankworth will release new album ‘Live To Love’ on September 30th 2013. Whilst It Happens Quietly tipped its hat to the past with interpretations of classic standards, Live To Love offers a change of direction and features a selection of jazz, soul and blues-infused original compositions alongside contemporary covers of songs by Wayne Shorter, Johnny Mercer and Donny Hathaway.

Although known primarily as a jazz singer, Dankworth was described by The Sunday Times as “one of our finest singers, regardless of category” and has collaborated with a diverse array of musicians and groups throughout her career including Marvin Hamlisch, Paloma Faith, Alan and Marilyn Bergman and Chick Corea. She is also an accomplished actress, having performed leading parts with The Royal Shakespeare Company, The National Theatre and in London West End musicals including Steven Sondheim’s Into The Woods.

In addition to four cover songs, Live To Love contains some powerful original material in the form of All Is Quiet, a stark, haunting ballad about human slavery written by Dankworth and bassist Geoff Gascoyne and featuring a guest appearance by The Brodsky Quartet; the album’s title track, a laidback, gently affecting song written by Dankworth’s husband, pianist Charlie Wood; and a reggae-inflected version of Tomorrow’s World, a tune written by Dankworth’s late father to which she has added a “quantum mechanics” lyric.

A deeply personal album, Live To Love draws on Jacqui’s thoughts on life and love and charts her continuing growth as a sophisticated singer of a wide spectrum of genres.