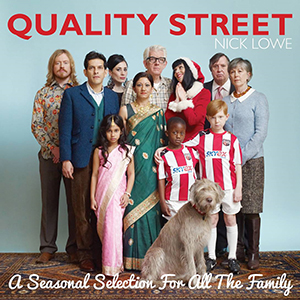 When Nick Lowe was approached by his record label about making a Christmas album, his reaction wasn’t exactly one of comfort and joy.

“It was more disquiet and alarm, accompanied by feelings of ‘Do they really think I would wish to sully my good name on this tawdry and vulgar commercialism?’” Lowe says with a laugh. “But that feeling lasted about thirty-six and a half seconds, before I came to and thought, ‘Vulgar, tawdry commercialism? Yes, please, when do we start?’ Seriously, I thought, ‘Wait a minute, this could be really good fun.’”

Though Lowe admits the holiday season was for many years something he “suffered through a bit,” that changed when he became a father for the first time in 2005. “There’s no doubt that since I had a little boy, I’ve sort of rediscovered some of the joys of Christmas,” Lowe says.

And the joys of Christmas infuse the dozen songs on Quality Street: A Seasonal Selection For All The Family (the title is a nod to a famous UK manufacturer of holiday sweets, while the Wes Anderson-ish cover image was conceived by Lowe’s wife, designer Peta Waddington).

As Lowe assembled his band and began thinking about how to add a new twist to the seasonal songbook, he made one rule. “We tried to make it a sleigh bell-free zone,” he says. “Really, what we wanted to do first was find songs either which people hadn’t heard millions of times before, but which were really good songs that we could get our teeth into and change them around,” Lowe continues. “Or if we were going to cover songs that were well-known, we wanted to do ones that we could put a brand new suit of clothes on.”

“The third option, of course, was to write some of our own, which is a bit of a taller order. You can knock out some jingle bell thing, but that’s not what we were trying to do. We were aiming for something which had a bit of quality to it. It all sounds straightforward and easy, but it was a lot harder to get the material together than you might think.”

Though Lowe had planned to start recording in the weeks leading up to Christmas, a spell of ill health pushed the project into the new year, a time when most of us are relieved to be free of stockings and Santa for another eleven months. “When we started, I was really convinced that we needed to use the energy of the Christmas we were about to have to fling ourselves out into the new year, and into spring,” Lowe says. “We thought we might have to festoon the studio with holly and Christmas cards, and put up a tree. But not at all. It was just a good time and a laugh throughout. And when we finished, it was almost like somebody had woken us up from a dream.”

The result is indeed a dream to listen to – a twinkling blend of traditional hymns, forgotten gems and Lowe originals that conjure up all the nostalgia, good cheer and warmth of the season. From the opening giddy-up of a rockabilly-charged ‘Children Go Where I Send Thee’ and the comfy cozy hush of ‘Christmas Can’t Be Far Away,’ the record deftly slaloms through such highlights as the beatnik bop of ‘Hooves on the Roof’ (written especially for the project by Ron Sexsmith), Roger Miller’s wistful classic ‘Old Toy Train’ and a New Orleans-style ‘Silent Night’ before wrapping up with a ska-flavored take on Wizzard’s 70s-era glam hit ‘I Wish It Could Be Christmas Every Day.’

But at the heart of Quality Street are two Lowe songs surely destined to become future seasonal standards. ‘Christmas at the Airport’ is a playful take on the travel tie-ups we’ve all experienced, complete with Ray Conniff-style backgrounds punctuated by terminal p.a. voiceovers. Meanwhile, the stunning ‘I Was Born In Bethlehem’ unfolds as an inventive retelling of the nativity. Lowe says, “It’s this amazing story that everyone knows, but I was trying to write it as if you’d met Jesus on a plane, and he just started chatting away about that night. I tried to make it very conversational and sort of matter of fact.”

That kind of conversational feeling is also part of what continues to make Lowe one of pop music’s most natural and likeable singers. With a voice that keeps getting richer and more nuanced with age, he has the kind of unfussy delivery that communicates directly to the heart, but always with a dash of wry humor. Thus, the perfect instrument to cut through all the shiny commercial wrapping that so often obscures what’s important about the season.

Here or abroad, anyone who likes their Christmas soundtracks with plenty of heart and humor, and a sprinkle of understated charm, will enjoy Quality Street for the newly minted classic that it is.

You might say it’s the kind of record that gives vulgar, tawdry commercialism a good name.