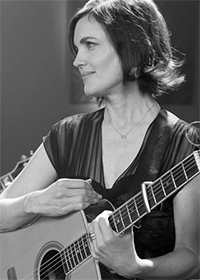 Elizabeth McGovern, who plays Cora, Countess of Grantham in Downton Abbey, will be supporting Gretchen Peters on the London date of her upcoming tour. Elizabeth’s band Sadie and the Hotheads have been together since 2007 when she took guitar lessons from Steve Nelson who encouraged her to write her own songs. The support slot came about when Elizabeth mentioned in an interview with Country Life magazine, that Gretchen’s song “Five Minutes” (taken from Hello Cruel World) was her favorite song.

Gretchen will be on tour throughout the UK from the 27th February till the 17th March before continuing to Germany and Holland (see below for details), tickets for the London date featuring Sadie and the Hotheads can be bought here.