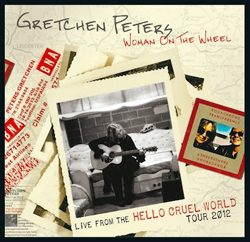 Gretchen Peters is set to release ‘Woman On The Wheel: Live from the Hello Cruel World Tour 2012’, described as “a tour journal of sorts; a snapshot of a very busy and rewarding year, a sampling of the shows, a peek backstage – all of that and then some.” It’s a 60 page hardcover book, Live CD and DVD and will be available only at shows for the time being including Gretchen’s upcoming UK tour which begins in February in Ireland (see below for the full dates).

Gretchen Peters on 2012:
What a year. 121 shows, 170+ days on the road, four trips across the Atlantic and back; Portland, Oregon to Jacksonville Florida; Portland, Maine to San Diego, California. Collaborations with friends and heroes, first time appearances from the Opry to the Isle of Wight and an overwhelming reception for an album that felt entirely personal yet somehow reached more people than ever.