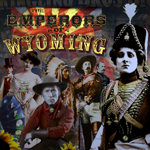 The Emperors of Wyoming have just released a new video for their track ‘Avalanche Girl’ taken from their self titled debut.

Butch says of the song “What started out as reminiscing about our reckless teenage years quickly turned into a song, almost overnight. The Avalanche Girl is real, a true story. I was sixteen years old and had a whirlwind three day fling with a beautiful, scary, wild-as hell small town femme fatale. She used me and abused me for a weekend, then discarded me like a crumpled can of cheap malt liquor. After the band’s initial email flurry with ideas for the song, I quickly came up with a basic track, and almost like we had a 6th sense, at the same time Phil came up with all the lyrics without hearing any music. The words and melody fit perfectly, which still blows my mind! I added a Fender 12 string after we recorded the basic track. As far as I’m concerned, you can’t have too much 12 string on an EOW song.”

The Emperors of Wyoming is available now
Buy or stream here