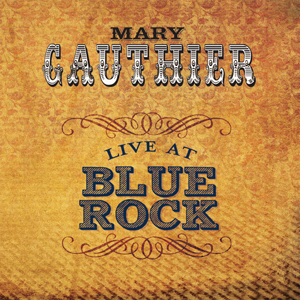 After twelve years of relentlessly touring the world with her acoustic guitar and harmonica, singing on stages large, small and in between, Mary Gauthier is proud to announce the release of her first live recording.

Recorded with a small band at the very highest level at the incredible Blue Rock Artist Ranch and Studio just outside of Austin, Texas, ‘Mary Gauthier Live At Blue Rock’ is an emotional evening of songs from an artist who has put in her ten thousand hours and mastered her craft. This recording is the culmination of a lifetime of Mary’s passion for story songs and tales that speak to the heart of the human condition. Many of the characters she sings about are hard hit, wounded and wandering outcasts – people whose lives have been scarred with blows so unexpected and traumatic that they were knocked into another place, a place unfamiliar – a place where transformation can happen.

The band follows Mary to the brink of the emotional ledges she navigates with ease, and together they carry the bittersweet truths of these characters’ lives to the hearts and souls of the listeners. We cannot help but see there’s a bit of each of us on display here, captured and revealed by a fearless artist in top form.

There’s Steam Train Maury, the wandering King of the Hobo’s, and Karla Faye Tucker, executed after 15 years on death row. There’s the lost soul stumbling through a haunted life calling an x-lover’s name outside a mission at sunrise in Cigarette Machine, and an old man in The Rocket who sits at the station watching the trains, remembering the one that took his boy away to war and did not bring him back. There is the bewildered and confused adoptee in Blood Is Blood, who looks into the faces of strangers, wondering if they might be blood, and the alcoholic in I Drink, who has all but surrendered his soul to the bottle. But if you listen closely you will hear that none of these characters has given up, and in Mary’s voice you hear the road-weary determination of someone who refuses to surrender to despair no matter the sorrows endured. The tenacity of these characters, their willingness to get up from the dirt they were knocked down into, the emotional honesty of these songs, the love of humanity on display here – make this a record for the ages.

Track list:
Your Sister Cried
Last of the Hobo Kings
Blood is Blood
Cigarette Machine
Our Lady of the Shooting Stars
The Rocket
Karla Faye
I Drink
Sugar Cane
Drag Queens in Limousines
Wheel Inside the Wheel